Bank of Bethesda at Old Georgetown Road and Wisconsin Avenue

The Bank of Bethesda was established in 1919 by community leader Walter Tuckerman. The Bank, located since 1926 in a distinctive building at the intersection of Old Georgetown Road and Wisconsin Avenue, was a major factor in Bethesda’s rapid economic development.

In 1919, a group of Washington businessmen decided to organize a bank in Bethesda. The bank had a starting capital of $25,000, and the organizers agreed to set aside enough stock so that residents of Bethesda and surrounding areas could become stockholders if they wished to. In addition to the bank’s capital of $25,000, the founders secured a surplus of $5,000 by selling one thousand shares of capital stock with a par value of $25 for $30 each.

Walter Tuckerman — the developer of Bethesda’s first major residential neighborhood (Edgemoor) and later the first head of the Bethesda Chamber of Commerce — was the key founder and first president of what was named the Bank of Bethesda. The bank was initially housed in the “Gate House” of the Edgemoor subdivision (at the corner of Edgemoor Lane and Old Georgetown Road), which was Tuckerman’s real estate office. The room in which the bank first did business was 350 square feet – small enough that some jokingly predicted the entire bank would be carried off in the night. 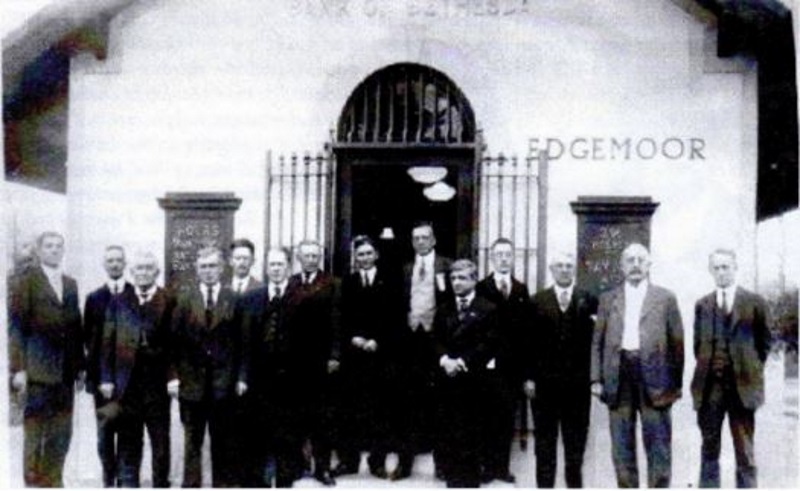 In 1923 George Sacks  — one of the founding directors of the bank and a prominent Bethesda real estate developer — purchased a piece of land known as “Pritchett’s Purchase,” or “The Trap,” which he deeded to the bank for the construction of a new building.  After two years of construction the new home of the Bank of Bethesda, which cost approximately $60,000, was opened to the public on September 14, 1926. The new building was built from the same Stoneyhurst Quarry mica schist that was used throughout downtown Bethesda, including in a row of stores Walter Tuckerman and George Sacks built at about the same time, and a decade later in the Bethesda Post Office.

After its relocation the bank became the chief landmark and symbol of the town for half a century — Bethesdans gave directions and measured distances in relation to the Bank, and its solid, stolid presence reflected the values (and hopes) of its founders.

George Sacks became president of the bank in 1928, and by 1929 deposits reached $1,000,000. The bank weathered the crash and Depression, reopening on 15 March 1933 after the bank “holiday” that inaugurated FDR’s new administration.  By 1939, deposits topped $2 million, and few argued with Tuckerman’s belief that the bank’s “success was largely responsible for the rapidity of growth here.” By then, the Bank of Bethesda had made more than $1.5 million in FHA loans, and was one of the six largest banks in Montgomery County.

In the forty years after World War II the Bank opened branches, including one in the Wildwood Shopping Center, and financed much of the development in and around Bethesda.  Its fate as an independent community institution was sealed by the wave of bank mergers and acquisitions that swept the U.S. beginning in the 1980’s.  It went through a series of mergers, becoming successively Heritage International Bank of Bethesda (with assets of about $25 million) and then the Bank of Maryland – Montgomery County.  Ultimately it became part of SunTrust Banks (now Trust Financial Corporation).