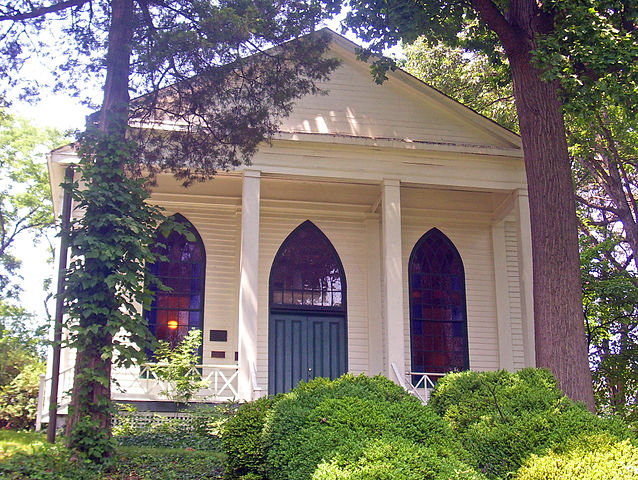 Architecturally, the Bethesda Meeting House and parsonage represent sophisticated styles that, for one reason or another, never flourished in Montgomery County.

The background of the church and its various congregations is inextricably linked with the history of Montgomery County. In fact, the name of the modern community of Bethesda takes its name from the church. The word refers to a place of healing mentioned in the Bible.

In 1820 the Presbytery of Baltimore directed that a church be organized on the Rockville Pike for the Presbyterians in the southern reaches of the Cabin John congregation. The elders purchased a parcel of land and either built or converted a structure already there to serve as the Bethesda Meeting House. This building was destroyed by fire in 1849, and the new church constructed on a foundation using stones from the original church.

This new building, on a hill overlooking the Rockville Pike, served as the Bethesda Presbyterian Church from 1850 until 1925 when the congregation decided to erect a new church farther south in Bethesda. When the church moved to its new location, the trustees sold the building and seven acres of land to May Fitch Kelley in 1925. The Presbyterian congregation, however, retained ownership of the cemetery and the graveyard. Twenty years later, the property was sold to a Catholic missionary group, and then to the trustees of the Temple Hill Baptist Church in the 1950s.

The Bethesda Meeting House property includes the 1850 Meeting House itself, the mid-late 19th century parsonage to the south, and the associated cemetery. The church is a large, frame structure built in the Greek Revival “temple” form, although it features Gothic-style windows throughout.

The gabled main facade faces east and contains three bays. The central entrance is flanked by two large pointed-arch windows identical to the Gothic-style windows along the sides of the building. The bays are separated by wooden pilasters which also emphasize the corners of the building. The pilasters support a wide frieze that wraps around the structure beneath the eaves.

The gable end here is of shiplap siding, and a recessed carved panel reads “Bethesda Church, rebuilt 1850.” The rest of the siding on the church is of clapboards. There is a large pointed-arch overlight above the paneled double doors, which features delicate foliated muntins and stained glass panes.

The open, two-story pedimented portico that spans the entire front is an early-20th century addition. An old photograph of the church shows a much smaller hooded-type portico, decorated with shingles. However, this was likely a Victorian addition itself.

A bell now rests on a wooden frame that is suspended from the ceiling of the portico. True to the Greek form, the church never included a bell tower. With the exception of the windows, the sides and rear of the church repeat the Greek Revival style of the front, with a boxed cornice, frieze, and pilasters. The sides are three bays deep, and the windows, like those on the front, feature triple sash with a fixed-arch section of foliated muntin atop double-hung 15/20 sections.

The grade slopes downward toward the rear of the church, exposing the stone foundation made from the ruins of the original 1820 church.

On the interior, an entrance vestibule is formed beneath the former slave gallery. The original pews were replaced with Gothic-style pews, and one of the windows was replaced with clear glass to provide light. Attention is drawn to the front of the church by an arched, vault-type opening over the apse. It is trimmed with the same Greek-style pilaster molding seen throughout the building. To the south of the church is a two-story frame Victorian parsonage built on a cruciform plan, with some Queen Anne-style embellishments including shingled gables, 1/1 sash windows, and German siding. However, the building also possesses a number of “Cottage Gothic” motifs made popular by Andrew Jackson Downing between 1840 and 1870. The house is festooned with hood-type gables, verandas, scrolled brackets, and bay windows, all of which are basic to a Downing-influenced house.