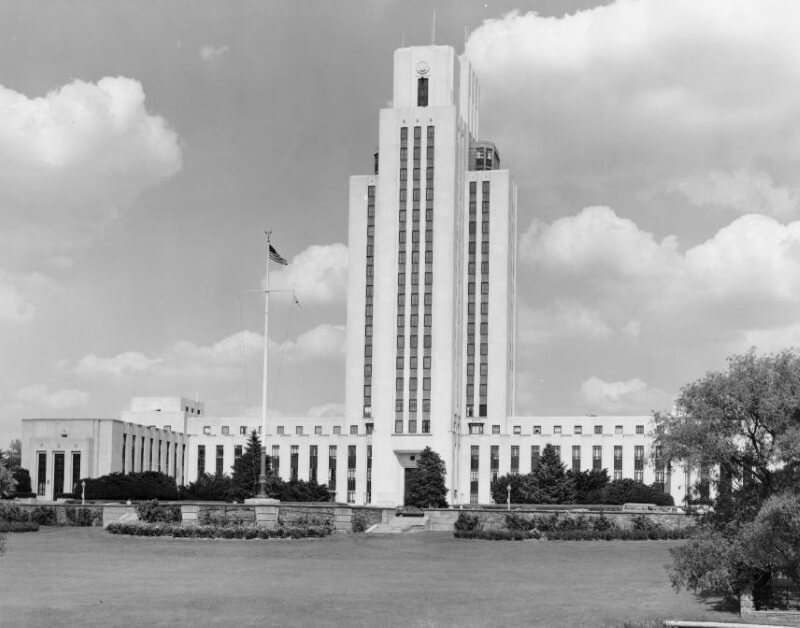 Built from a sketch by President Franklin Roosevelt, the Bethesda Naval Hospital – now the Walter Reed National Military Medical Center — is the largest military medical complex in the world.  Its iconic tower, opened in 1942, is listed on the National Register of Historic Places.

In 1864 – the same year that Congress appropriated funds for Arlington Cemetery – Abraham Lincoln commissioned Washington, DC’s first Naval hospital, located blocks from the Capitol. In 1906 the Naval Hospital moved to a newly constructed facility at 23rd and E Streets N.W., across from the current State Department complex. The President was involved in design specifics as well. The tower and its elegant entrance hall inspired objections that included cost concerns as well as a tower height that violated county regulations. But Roosevelt persisted, insisting that the tower “will be a landmark for generations to come.” (Ref 1, p 427).   The President personally selected the site on Rockville Pike in Bethesda, Maryland, a run-down farm with a small natural spring-fed pond that reminded the President of the biblical pool of Bethesda, famous as a spiritual place of healing. The pond was named Lake Eleanor to honor Mrs. Roosevelt.

Funds were appropriated in 1938 and ground was broken in 1939. The 20 story tower afforded magnificent views and, as President Roosevelt had predicted, Bethesdans instantly made it a local landmark. The administration building and tower with its gleaming 362-foot front and art deco flourishes boasted a lobby two stories high sheathed in curved slabs of green Vermont marble and piers of dark green serpentine. The trim was white bronze and the mezzanine rail stainless steel.  Set in the floor was a brass compass face six feet in diameter while above hung an egg-shaped, white glass lamp decorated with a steel ring and capped by lotus leaves. It was a beautiful and impressive space. Large trees were transplanted from Gravely Point, where National Airport was being built.  (Ref 1 pp 508-509)

President Roosevelt commissioned the hospital on August 31, 1942 (Ref 1 p 532). FDR drove through Bethesda in his open Packard and dedicated the facility as the National Naval Medical Center. As this was the hundredth anniversary of the naval medical service, doctors at several foreign stations joined in the broadcast of the hospital’s dedication.

The initial plan included the Naval Hospital with 450 beds and an outpatient facility, the Naval Medical School, the Naval Dental School and the Naval Medical Research Institute (NMRI). By the end of the war in 1945, with the addition of temporary buildings, the hospital accommodated 2464 inpatients.  The Naval Medical School focus was post-graduate training in submarine and aviation medicine.  Appropriately dubbed “The President’s Hospital”, the hospital has served every president since Roosevelt, including President Kennedy’s postmortem examination after his 1963 assassination.  A special dedicated Medical Evaluation and Treatment Unit (METU) assures appropriate security and privacy for the President and Vice President.

Over the years, many additional facilities were added to or established at the site (Ref 4).

1949 The world’s first tissue and bone bank was established at NNMC to collect, preserve and store human tissue for surgery. This Navy program, which set standards still applicable today, was described as serving “more hospitals, military, governmental and private, than any similar activity in the world.” In 1961, the bank provided over 3,000 square inches of skin to Brazil following a fire.

1957 The first nuclear reactor designed specifically for medical purposes was dedicated at NNMC. It was used to research and manufacture radioisotopes for diagnosis and treatment, for research on the effects of irradiation, and to train medical personnel in radiobiology.

1959 The Navy Toxicology Unit was established

1972 The Uniformed Services University of the Health Sciences (USUHS) was chartered by an act of Congress. Its first class graduated in 1980.

1977 The original Naval Medical Command tower was listed on the National Register of Historic Places by the Department of the Interior.

1990 The first of five Zachary and Elizabeth Fisher Houses was constructed on the NNMC campus to house family members of ill or injured service members.

2005 The Base Realignment and Closure (BRAC) Act closed the Walter Reed Army Hospital (then located in Washington DC) and consolidated it with the NNMC in Bethesda.  The resulting Walter Reed National Military Medical Center is staffed by Navy, Army and Air Force personnel.

2010 The National Intrepid Center of Excellence (NICoE) was established by the Zachary Fisher Foundation and its Intrepid Fallen Heros Fund, to advance the study and treatment of traumatic brain injury, post-traumatic stress and psychological health.

What began as FDR’s dream (and sketch) of a Navy health care facility on the site of a sleepy small farm in Bethesda, has become an enormous tri-service health care, education and research complex (Ref 5).