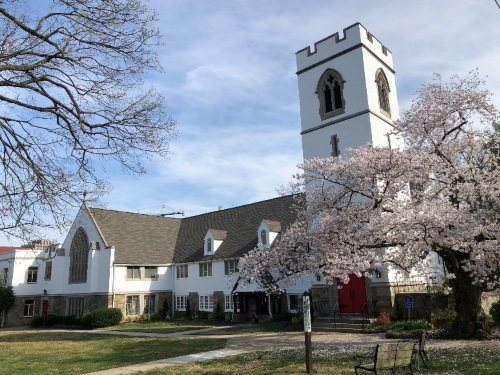 Bethesda Presbyterian Church is “the church that named Bethesda.” The current structure has been the church’s home for almost 100 years, but the congregation served southern Montgomery County at two other locations beginning in the 1720’s.

Although there is little written documentation, church tradition dates the founding of this Presbyterian gathering as early as 1723. While the first services most likely were conducted by itinerant ministers at family homes, evidence of a church structure dates to 1746. It was known as the Captain (later Cabin) John Meeting House and was located near Cabin John Creek about five miles southwest of Rockville (today the site of Potomac United Methodist Church, near the intersection of Falls Road and River Road). The first settled minister of the congregation was Rev. James Hunt, who served the Bethesda and Bladensburg congregations from 1769 – 1793.

Due to population growth and shifts within the southern part of Montgomery County, the congregation relocated to Rockville Pike in 1820 and renamed their new structure the Bethesda Meeting House. That structure, which burned down in 1850, was replaced by a Greek Revival building that still stands and is currently occupied by Temple Hill Baptist Church. In 1871, when a new post office was constructed near the intersection of Rockville Pike and Old Georgetown Road, it adopted the name of the meeting house. Seven years later the county defined an election district in the southern part of the county and named it Bethesda.

Reflecting population shifts and a growing membership, the congregation decided in 1923 to relocate. By 1926, it had moved into a new building at its current location on the corner of Clarendon Road and Wilson Lane, adjacent to Bethesda Elementary School. The new building was in the Edgemoor subdivision that was being developed just west of the intersection of Old Georgetown Road and Rockville Pike, near what was becoming the heart of Bethesda’s commercial center. The establishment of the Battery Park subdivision and an influx of residents associated with the growth of the National Institutes of Health (which began moving to Bethesda in 1938) prompted an increase in church membership to more than 400 by the end of the 1930s.

During the next decade, the congregation engaged in several building programs. In 1942 and 1943, the original rectangular structure was enlarged by adding a transept and chancel, while a bell tower replaced the entry portico, giving the church a cruciform footprint and an English Gothic Revival appearance. In 1952, a large educational wing, providing space for 800 students, was added at the rear of the structure.

By the early 1960s, church membership had risen to more than 1,200. During the 1960s and first half of the 1970s, the congregation was served by the Rev. Carl R. Pritchett, who was active in the Civil Rights movement, participating in the March on Washington (1963) and the Selma, AL witness (1965). Following a congregational division in the mid-1980s, membership declined.

During its first three centuries the Bethesda Presbyterian congregation witnessed the American Revolution, slavery, fire, the Civil War, segregation, suburbanization, and schism. As it enters its fourth century, the church has re-oriented its mission, focusing more on urban concerns. It is now home to a Montessori school, the Del Ray Club (meeting place for 55 Alcoholics Anonymous and other 12 step groups per week), and Bethesda Cares (community outreach program for those suffering from homeless). “Bethesda Presbyterian Grows Up.” December 7, 2013. Found in the church archives and converted into DVD format. This is a semi-professional promotional piece for the expansion of the worship and educational facilities in the early 1940s. It documents life of Bethesda and the congregation at the beginning of World War II. Accessed March 24, 2020.