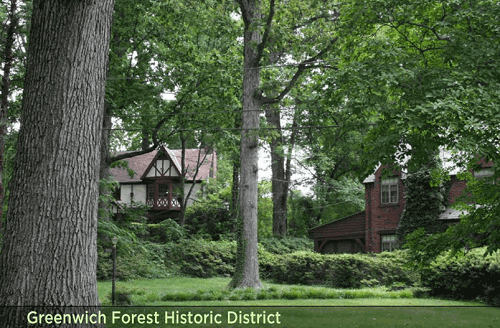 Greenwich Forest developed during a time of great expansion in southern Montgomery County, which was the result of the growth of the federal government after World War I, in the New Deal era, and during World War II. These factors played a significant role in increasing the quality of design for subdivisions like Greenwich Forest in the southern portion of the County.

Located just beyond the development of closer in Chevy Chase during the first two decades of the twentieth century, Greenwich Forest’s success depended on the growing interest in and availability of the automobile. The automobile enabled residents to get to their jobs without living in a location that was served by public transportation.

As new roads allowed faster travel between Washington, D.C., and its environs, the healthy, green suburbs of Montgomery County became a reasonable option for families of the 1920s and 1930s.

Builder and developer Morris Cafritz capitalized on this new situation and went one step further by designing a neighborhood that was located in a tranquil, verdant landscape and was also convenient to work when commuting by automobile.

The Cafritz Construction Company was critical in redefining economic and social traditions throughout the Washington metropolitan area, and Greenwich Forest served as the model. Although based on similar successful Washington, D.C., communities, Cafritz’s Greenwich Forest changed the paradigm of suburban development in Montgomery County.