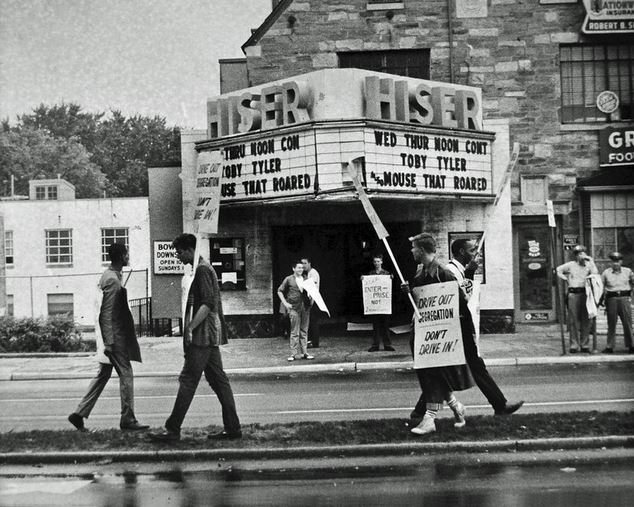 The Hiser Theater, originally unnamed, opened in November 1928 at 7414 Wisconsin Avenue, now the site of the Hyatt Regency Hotel.  Faced with Stoneyhurst schist like many of the pre-war structures in downtown Bethesda, the building was the only one with outdoor lighting on Wisconsin Avenue.  Shortly after the theater opened “talkies” were introduced.

There was a bowling alley in the theater’s basement.  At first, Henry Hiser (the 1930 national duckpin champion) leased the bowling alley from the theater and shopping center owner.  Eventually, Hiser became the owner of the theater and named it the State Theater.  He installed a Western Electric sound system — reputedly the first installed in a movie theater in the Washington area — but left the wooden seats untouched.  After a major renovation in 1939 -1940 the theater was renamed the Hiser.

Designed by Bethesda architect V.T. H. Bien, it featured an art-deco style, a single screen, a full stage with recessed lights and organ, and vending machines — but no lobby or concession stand.  The theater sometimes had to close due to summer heat. And because of Blue Laws it was closed on Sunday.

Over the years, the 500-seat theater was used for other purposes. During the 1930s, for example, the First Baptist and Lutheran congregations of Bethesda held services there before their churches were built.

John Hiser, son of Henry and owner of the theater by 1960, was adamantly opposed to desegregation and would not admit African Americans to his theater.  During the 1950s the theater was boycotted by the Woman’s Club of Chevy Chase for its racist policies.

In July 1960 two African Americans who had been denied entry to the Hiser Theater entered surreptitiously and were arrested.  On July 27, 1960, a protest organized by the Non-Violent Action Group (the same group that was more famously campaigning for the integration of Glen Echo Park that same summer) was staged outside of the theater, demanding its desegregation.  Faced with the prospect of being compelled to integrate, John Hiser sold the theater in September 1960; it was renamed the Baronet the next month.

The theater closed its doors on August 23, 1977, and was razed in January 1978 as part of the construction of the Bethesda station on Metro’s Red Line.

Hiser was elected to the County Council in 1962 as part of a slate that promised, among other things, to repeal the County’s law banning discrimination in public accommodations, including theaters.  The repeal went through, but became moot when Congress passed the Civil Rights Act of 1964. Among other things the group also relaxed the County’s zoning laws, permitting more development and greater density in downtown Bethesda, Friendship Heights and Silver Spring. Most of them, including Hiser, were defeated when they sought reelection in 1966.