When it began to evolve from a crossroad into a suburb in the two decades prior to World War I, Bethesda had few shopping options beyond a few general stores (Offutts, Wilsons).

That wouldn’t do for a town just outside of Washington, DC that was beginning to attract relatively affluent families seeking green neighborhoods of single-family homes in which to live and raise their families.  Those residents would need convenient places to shop for a variety of goods and services — places of the kind that the adjoining town of Chevy Chase inexplicably barred.

Necessity is the mother of invention.  One of the first solutions to the upscale shopping “gap” to emerge in Bethesda was construction of the the strip of stores that we now call the Leland Shopping Center, built in the late 1920s on the east side of the 7000 block of Wisconsin Ave. This row of stores, designed in the English Tudor style favored by Walter Tuckerman, was conceived and built by Monroe and Robert Bates Warren (the “Warren brothers) to serve and complement the Leland housing development that they were building along Leland Avenue just behind (i.e., to the east of) the stores.

The cntemporaneous advertisements for the Leland subdivision are themselves of interest, mostly for what they tell us of real estate practices and values in the mid-1920’s. Leland was to be a neighborhood of “Modest Mansions”, “surrounded by the high-class restricted residence sections of Chevy Chase, Edgemore and Battery Park.” And it would be “free from the noise, smoke and congestion of the city – from the questionable mixtures of population that permeate the downtown sections.” 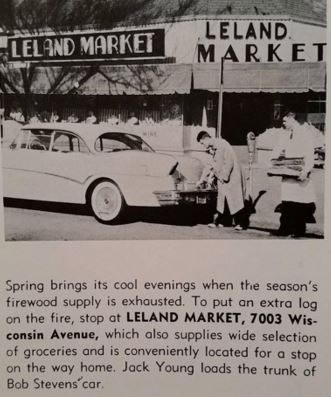 The Leland Shopping Center differed from other shopping areas in that it was preplanned — built and leased all at once in a manner designed to meet the varying shopping needs of the community rather than evolving over time at the whims of the shop owners.  As a result, it was theoretically far more convenient. The shopper, typically the woman of the house, could do all her shopping at one place, and walk from home for drive and park right nearby.  While it was not a true shopping center as we conceive of today with dedicated parking, and much larger selection ( such as the Saks center later developed just across the street to the north 10 years later), it was a large step toward that concept and served a vital role in the emerging new Bethesda.

By November of 1925, the center had been subdivided into nine plats. By 1926 three of these plats had stores and in 1927 four of the plats were sold.

The stores were built in English Tudor style, which was quite popular at the time, just before the more modernist deco and streamlined look, designed to mimic the look of a charming old English village. Typical features of this look included steep triangular gable roofs, rustic wooden boards applied to contrast stuccoed walls, and doorways set back into gothic style recesses.  The idea was that new suburbanites could feel a bit more like English gentry as they attended to their shopping needs.

Some of the first tenants of the Leland Shopping center were Leland Pharmacy, A&P supermarket, and Sanitary Grocery Store.  The Leland Market (later the Leland Deli) took over the Sanitary space and became a landmark store to generations.   This market satisfied the bulk of a family’s grocery/sundry needs and, as with most markets of the time, had family tabs and delivery available.  Many generations of BCC students worked at the market at some point in its history, and once it evolved more into a deli, their Steak and Cheese submarine sandwiches had a diehard fan club.

Due to its iconic design and integral role in Bethesda’s development the “Leland Tudor Style Shopping Center” has been given historic protection. MHT #M-35-14-8. The Gellman brothers at their soda fountain at the Leland Pharmacy

Kelly, Clare Lise, 2012, Places from the Past, The Tradition of Gardez Bien in Montgomery County, Md.