The Little Tavern at 8100 Wisconsin Avenue 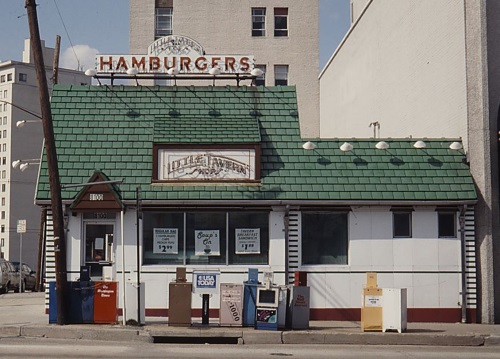 The second Little Tavern restaurant in Bethesda, built in 1955, retains much of its original appearance. It was designated an historic site by Montgomery County in 1994 as a “culturally significant representation of a type of restaurant which would become symbolic of the American lifestyle in the late 20th century.”

The Bethesda Little Tavern was part of a chain of hamburger restaurants, most of them located in the Washington D.C. metropolitan area.  Although the last of the restaurants closed over a decade ago, the building (the second Bethesda location of the chain) still stands in its original location.

The first Little Tavern was opened in 1927 in Louisville, Kentucky, by entrepreneur Harry F. Duncan.  At the height of the chain’s success, during and after World War II, there were almost 50 Little Taverns.  Duncan, a D.C. resident for over than 60 years, sold the chain in 1981. By the 1990s, the business was experiencing economic reversals and losing market share. The last Little Tavern closed in 2008, though the Laurel location re-opened that year as “Laurel Tavern Donuts” after receiving the original hamburger recipe.

The chain’s original slogan was “Buy-‘Em-By-the-Bag.”  Duncan claimed to be the inventor of the cheeseburger, and the originator of the concept of a light hamburger on a bun.  He reported that demand for the small hamburger — the slider — grew so quickly he didn’t have a chance to patent it. Little Tavern hamburgers — “greasily fragrant with onions and small enough to go down in a few bites” were “usually were sold in multiples.”

The first Bethesda Little Tavern opened in 1939 at 7317 Wisconsin Avenue, a few blocks from the current building, which was built in 1955.  The first location had a symbiotic relationship with the Lust Movie Theater, whose building also survives today as the Bethesda Blues and Jazz Supper Club – during and after World War II, movie go-ers could eat at The Little Tavern before crossing the street to attend a movie.  Duncan promised “Cold Drinks and Good Coffee” to entice the movie crowd.

In 1963, the first Bethesda Little Tavern was moved to 4620 Montgomery Lane before being demolished in the 1970s.  The design of the current (1955) building, a departure from the architectural concept of the early 1930s, reflected a marketing approach designed to attract car-based customers.

Today the 1955 building appears to retain its original building materials, particularly the distinctive green roof that was a marketing symbol for the chain. It is constructed of white porcelain enamel panels.  Its front façade is divided by three vertical bands of green and white tiles.  Inside the building, the only original feature is the green and white checkerboard floor.  The Bethesda location is one of a handful of original Little Tavern buildings still standing.

From 1928 to 1931, Little Taverns were built in a block construction style which closely resembled the White Castle and White Tower restaurants. Determined to distinguish his restaurants from the others, Duncan changed the architectural style in 1931 to an Old English Cottage look.  The new Tudor-like style was designed around a quaint pitched roof which was always bright green.  Duncan also used more modern building materials than his competitors — Vitrolite, tile, Formica, and aluminum alloys.  The Bethesda Little Tavern reflects Duncan’s vision of the new, eye-catching style.

The Bethesda Little Tavern was small and could only accommodate a few seated customers – Duncan’s business model centered on take-out orders.  One BCC student who graduated in 1973 remembers skipping classes with friends to go to “Club LT” for “six small with cheese and mustard/ketchup.”  Even today there is an active market for LT collectibles, such as the toothpick holders and the squeeze bottles.  (Dinerhunter.com Blog)

By the early 1980s, Americans tastes had begun to change and Bethesda property values skyrocketed.  The Little Taverns struggled to survive and the chain was now reduced to about thirty outlets, including the Bethesda location.  The franchise needed an upgrade to survive.  In 1983, Gerald Weden and his architect, Timothy Crosby, were hired to help restore many of The Little Tavern shops in the D.C. area. The most touted restoration of The Little Taverns in Montgomery County was the Bethesda Tavern on Wisconsin Avenue, but the restored signage has disappeared.

The Little Tavern building was designated an historic site by Montgomery County in 1994, one of nine sites in downtown Bethesda selected for Historic Preservation. Its roof was destroyed by fire in 1995, but was restored, and the building retains its historic charm. The Master Plan for Historic Preservations describes it as “… a reflection of the early automobile era in Bethesda and … a culturally significant representation of a type of restaurant which would become symbolic of the American lifestyle in the late 20th century.”  The Plan also notes that it is a distinctive example of the roadside architecture that typifies the early automobile era. 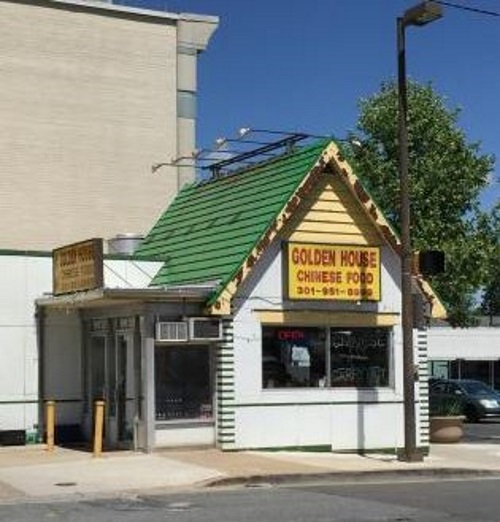 The Little Tavern building maintains its unique architecture, but has been repurposed as a Chinese carry-out restaurant. The green roof is still visible from Wisconsin Avenue, although tree limbs obstruct the view.