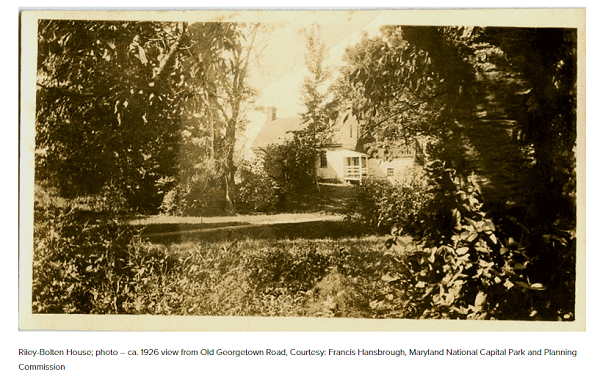 South of Rockville, along the Great Road (today’s Rockville Pike), were woods and farms, and the land that is now Luxmanor was one of these farms. The farmhouse that was the center of Luxmanor still stands at 11420 Old Georgetown Road. According to legend, the house was constructed after the Revolutionary War by a young soldier. It was initially owned by the Riley family and their name can be seen on an 1865 map, just southwest of Montrose Post Office.

We would know little about these early years if it were not for Josiah Henson, who was enslaved by the Riley family that lived in this main house. Henson’s 1849 autobiography, which he narrated, was purchased and read by writer Harriet Beecher Stowe. Stowe’s imagination was stimulated by this and other slave narratives and, as a result, she wrote Uncle Tom’s Cabin, which was published in 1852. It was a bestseller and, when Stowe revealed that Tom was modeled on multiple enslaved men including Henson, Henson’s autobiography became a bestseller, too. Importantly, Henson was entirely unlike Uncle Tom — he was a strong-willed leader who was deeply concerned about helping his enslaved compatriots.