Madonna of the Trail Statue at 7400 Wisconsin Avenue 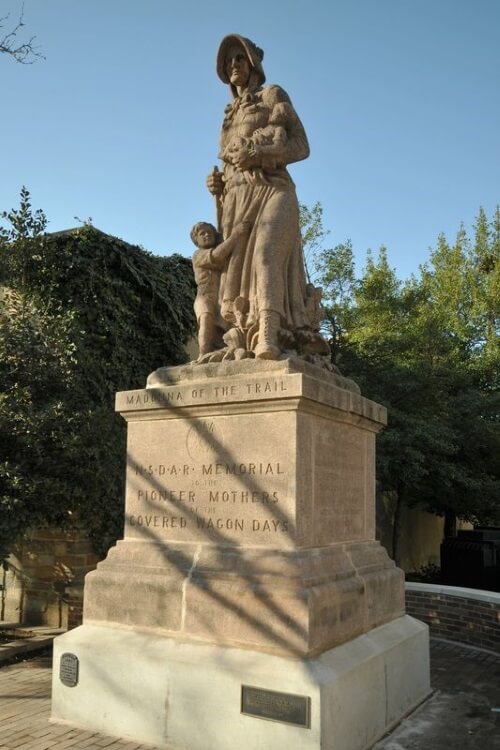 The Madonna of the Trail in Bethesda is one of twelve identical monuments from Maryland to California along a key route of Western migration in the 18th and 19th centuries. Erected by the Daughters of the American Revolution in 1929, the eighteen-foot-tall granite statue of a stoic pioneer woman with her two children, holding a rifle, commemorates the strength and determination of pioneer women. The statue is currently located next to the former Bethesda Post Office on Wisconsin Avenue.

In 1755, British Major General Edward Braddock led an army of English soldiers and American colonists through what would become Bethesda on his way to attack the French at Fort Duquesne—modern-day Pittsburgh. Braddock was accompanied by a young colonial officer named George Washington, whose earlier defeat at the hands of the French and their indigenous allies near Fort Duquesne began the French and Indian War.

The expedition was a disaster. The French and their allies ambushed Braddock’s forces. In the ensuing route, Braddock was killed, and two thirds of his men were killed or injured. The survivors retreated to Virginia under Washington’s command. Despite this inauspicious beginning, the British went on to win the war, driving the French from Canada and the Ohio Valley.

The road blazed by Braddock and Washington became America’s first National Road, an important route west for American settlers. The intersection of Old Georgetown Road and Wisconsin Avenue was often the first resting place for European settlers heading west after leaving the port of Georgetown. An ‘old stone tavern’ provided rest and respite for travelling settlers. The Madonna of the Trail commemorates Bethesda as the first stop on the long journey west.

In 1911, the Daughters of the American Revolution established a committee known as the National Old Trails Road Committee whose goal was to establish the Old Trails Road as a National Memorial Highway and erect a monument to pioneer women in each state through which the road passes. The Madonna of the Trail design, accepted in 1924, was chosen over a proposal of small cast iron markers. The design was of a pioneer woman clasping her baby while her young son clings to her clothing. The mother holds a rifle, an allusion to the danger of the journey that is today a pointed (albeit unintentional) comment on the violence that accompanied the displacement of indigenous people.

The Madonna is heroically proportioned—ten feet tall and set on a six-foot base, with a combined weight of seventeen tons. The figure and base rest on a two-foot foundation, so the monument stands a total of eighteen feet above the ground. The figure and the base are made of algonite stone.  Missouri granite was used as the main aggregate, giving the monument a warm, pink shade.

Original site of the Madonna of the Trail statue

On each side of the base of the monument is an inscription. The inscription on the southern side reads as follows:

It is possible that Major General Braddock spent a night in Bethesda on his way to Fort Duquesne, but no historical records confirm that.

The inscription on the northern side of the base states that:

THIS, THE FIRST MILITARY ROAD
IN AMERICA
BEGINNING AT ROCK CREEK
AND POTOMAC RIVER,
GEORGETOWN, MARYLAND
LEADING OUR PIONEERS
ACROSS THIS CONTINENT
TO THE PACIFIC

The twelve Madonnas of the Trail lead progressively west to a terminus in Upland, California. The Bethesda Madonna of the Trail was the last of the twelve to be built, even though it is the first on the path west. The other eleven statues, and the dates on which they were completed, are in:

Workers broke ground for the Bethesda Madonna of the Trail monument in March of 1929. It was built diagonally across from the County Building located at the Southwest corner of Wisconsin and Montgomery Avenues. The land on which the statue sat was donated by Walter R. Tuckerman, founder of Edgemoor, founder and president of the Bank of Bethesda, and first president of the Bethesda Chamber of Commerce. On Friday afternoon, April 19th, five thousand Bethesdans gathered to dedicate the statue. Bethesda Postmaster New accepted the statue on behalf of the people of Bethesda; Mrs. Getzendanner accepted the statue on behalf of the Daughters of the American Revolution; and Judge Harry S. Truman, president of the National Old Trails Road Association and later President of the United States, spoke. 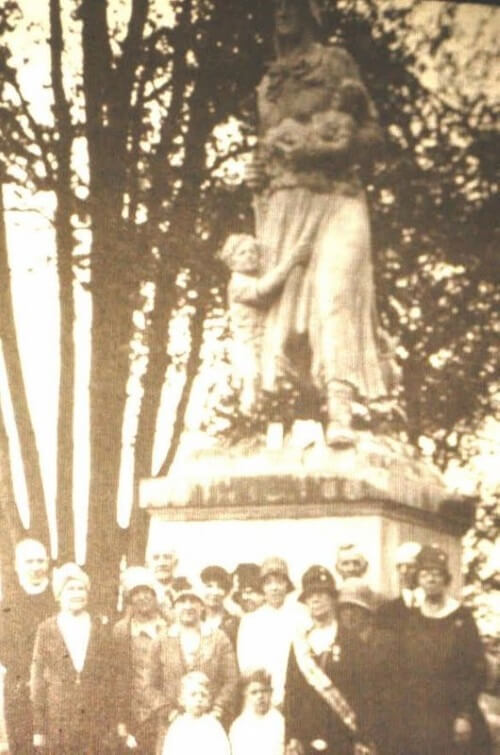 Unveiling of the Madonna of the Trail statue in 1929

In 2001 Cumberland, Maryland asked that the monument be relocated to a site within its borders, arguing that it would be more fitting to have the statue in Cumberland, because the National Road had been nicknamed the “Cumberland Road.” Not surprisingly, Bethesda declined the request.

The Bethesda Madonna of the Trail has been relocated twice since its construction in 1929. She was stored during the construction of the Bethesda Metro Station, could not be reset in her original location because Metro had put an elevator shaft there, and was therefore relocated to a space between the Old Post Office Building and the new Hyatt Regency Hotel. In December of 2004, the statue tilted on its foundation due to a sinkhole from a water main break. The monument was removed, stored offsite, and reinstalled when the ground was stabilized.

In 2018 a group of Bethesdans began the Campaign for Bethesda’s Madonna of the Trail. The organization argues that the current location is not appropriate — the Red Line shakes the statue and degrades its condition, and the site relegates the monument to relative obscurity. The Campaign has proposed relocating the monument to the Farm Women’s Co-operative Market on the east side of Wisconsin Avenue, which would connect Bethesda’s two monuments dedicated to women.

The Campaign has also pointed out that Bethesda’s Madonna of the Trail is facing east, and seeks to have the relocation include a reorientation so that the statue faces west to honor the pioneers. Some joke that Bethesda’s Madonna of the Trail faces east because no sensible American woman would think it a good idea to turn one’s back on Washington, D.C.

Photographs. Courtesy of the Campaign for Bethesda’s Madonna of the Trail.

“Madonna of the Trail.” Maryland Daughters of the American Revolution, www.marylanddar.org.