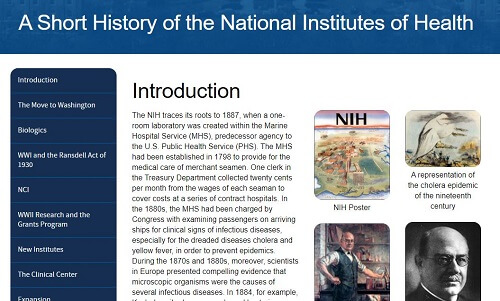 During World War I, the Public Health Service attended primarily to sanitation of areas around military bases in the U.S. The staff of the Hygienic Laboratory traced the cause of anthrax outbreaks among the troops to contaminated shaving brushes and discovered that the bunion pads widely used to cover smallpox vaccinations could harbor tetanus spores. In 1916, the director of the laboratory, Dr. George McCoy , hired the laboratory’s first female bacteriologist, Dr. Ida Bengtson. When the 1918 influenza pandemic struck Washington, physicians from the laboratory were pressed into service treating patients in the District of Columbia because so many local doctors fell ill.

In 1930, the Ransdell Act changed the name of the Hygienic Laboratory to National Institute (singular) of Health (NIH) and authorized the establishment of fellowships for research into basic biological and medical problems. The roots of this act extended to 1918, when chemists who had worked with the Chemical Warfare Service in World War I sought to establish an institute in the private sector to apply fundamental knowledge in chemistry to problems of medicine. In 1926, after no philanthropic patron could be found to endow such an institute, the proponents joined with Louisiana Senator Joseph E. Ransdell to seek federal sponsorship. The truncated form in which the bill was finally enacted in 1930 reflected the harsh economic realities imposed by the Great Depression. Nonetheless, this legislation marked a change in the attitude of the U.S. scientific community toward public funding of medical research.