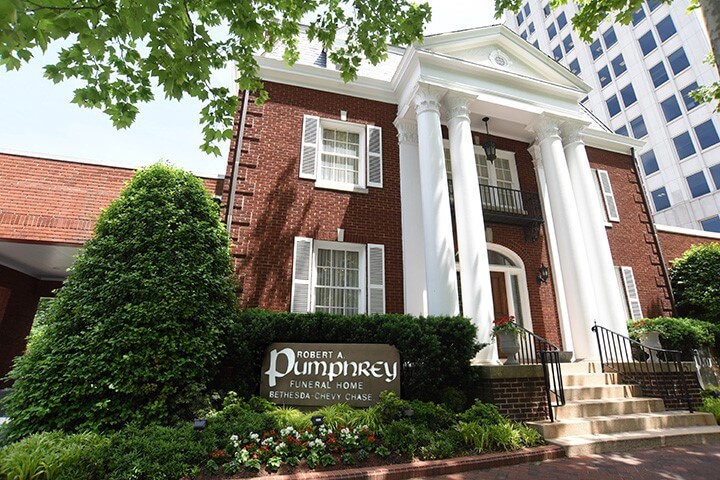 Pumphrey Funeral Home, reputedly the oldest business in Montgomery County, occupies a house on which once stood the “Old Stone Tavern”, the first commercial structure in what is now Bethesda.

Robert A. Pumphrey Funeral Homes is, by many accounts, the oldest business in Montgomery County. It was founded by William Ellican Pumphrey, who settled in Rockville in about 1840 and opened a carpentry shop. Building caskets led him to start conducting funerals in 1854. In the early days, funerals were usually held in the home of the deceased and Pumphrey had to preserve his clients in “large portable iceboxes,” according to a company history. One of his services: tending the body overnight.

William Reuben Pumphrey Sr. succeeded his father in 1887 and expanded the business. In the 1920s the modern funeral parlor — a home-like setting where a grieving family could greet mourners and hold services — emerged.   In 1928 the third Pumphrey to run the business — William Reuben Pumphrey Jr.– bought a mansion in Rockville that the family still owns. He and his wife, Irene, lived on the top floor and conducted business at street level. Six years later, the company acquired a large house on Wisconsin Avenue (7557 Wisconsin Avenue) in Bethesda that’ is now its main facility.

Pumphrey Funeral’s Bethesda address is said to have an historical connection to the “Old Stone Tavern,” which is considered the first commercial establishment in what is today downtown Bethesda.

The  provenance of the Old Stone House is not known, but it was likely part of the Magruder family tract – Springfield –  that was transferred during the Colonial period in the common way of either being  “taken up” or seized by  those seeking property by the Lord Proprietary.  The boundaries of the land were usually marked by logs or stones, which may be how the” Old Stone Tavern” got its name.

There were stories of General Braddock stopping there and of a visit by George Washington in the pre-Revolutionary period.  Starting in the 1840s, the Gingell family, which then owned most of the land in this section of Bethesda, likely owned the Old Stone Tavern.

During the Civil War, a one-day engagement, known as the Battle of Bethesda (but perhaps better described as a skirmish), took place by the Old Stone Tavern.  Confederate forces moving south on Rockville Pike, and Union forces moving north, met north of the intersection of Old Georgetown Road and Wisconsin Avenue, near the Old Stone Tavern. Shots were fired for most of the day.

Neither side prevailed, but inasmuch as the Confederates returned to Rockville after the engagement and never again sought to enter Washington, DC by this route the nod on the ‘battle’ goes to the Union forces. Since Bethesda was little more than a country crossroads at the time, very little was destroyed.

In 1891, when the electric railway arrived for the first time, the Old Stone Tavern was one of only a few buildings in downtown Bethesda:  “two country stores across a wide, wagon-worn street from each other, a couple of blacksmiths, a few farm houses, some barns, several windmills and an old tavern.”

Legend has it that some of the “stones’ that comprised the Old Stone Tavern were used in the foundation of the building that now houses the Pumphrey Funeral Home, but we have not been able to confirm that.

“The History of Bethesda” by By Mark Walston in the Bethesda Magazine Nov-Dec 2009.

“The Battle of Bethesda: A daylong firefight in Jubal Early’s march into Washington” by John H. Walsh in the Washington Post, April 26, 2014.