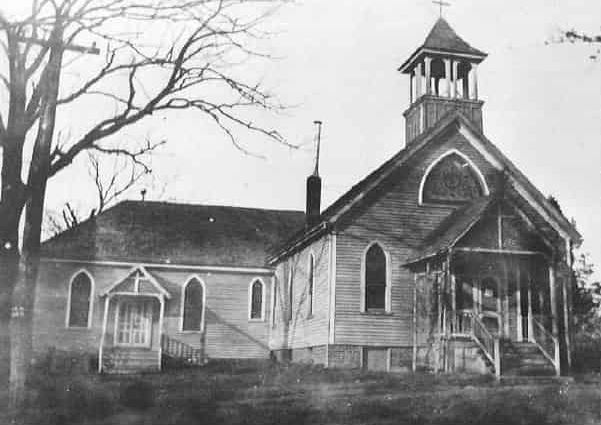 The first church in downtown Bethesda, St. John’s Episcopal dates to 1873; the current building dates to 1914, after the original wood frame structure was destroyed by fire.

Before 1873 the Dodges, Offutts, Drums, Oliphants, and others rode to St. John’s Georgetown, St. Alban’s, or Labyrinth Church in Silver Spring (now Grace Church) to attend services as there was no Episcopal church in Bethesda.

Rev. James B. Avirett, the rector of the Labyrinth Church in Silver Spring, decided it was time to start a mission church in Bethesda. The first service was held in the fall of 1873 at the home of J. Heath Dodge. After that, “Cottage Services” where held on weekdays in the homes of Colonel Robert P. Dodge, Hilleary Offutt, John Davidson and Greenbury Watkins.

In April 1874 construction began on a small wooden frame church on property donated by Colonel Robert and Caroline Dodge. When the church was completed there were stained glass windows, but no heat. Mr. Offutt’s parlor was used for services that winter.

Having begun as a mission of Labyrinth Church, in 1896 St. John’s started its own mission in Garrett Park in a chapel known as St. James, which later became Christ Church of Kensington. The mission at Chevy Chase Circle became All Saint’s Church in 1897. In 1903, St. John’s started a mission in Glen Echo that is now the Church of the Redeemer. Over the years St. John’s has been responsible for the organization of six mission churches in Montgomery County.

The church building expanded over time. In 1902 a Parish Hall with a kitchen was added to the frame of the church, and in 1904 oil lamps were replaced by electricity in the church and parish hall. In 1910 Joseph Bradley gave land to the church for the building of a rectory on Old Georgetown Road.

On May 29, 1914 the frame of the church as destroyed by a fire of undetermined cause. After the fire, Walter Tuckerman offered his store to the church to hold services until a new church could be built – it was located on the west side of Wisconsin Ave, just north of the bridge over the Baltimore and Ohio Railroad tracks. A new stone church was built on virtually the same location as the original frame church, facing Bradley Lane as did its predecessor.

The church’s archives include an article in the June 15, 1919 church newsletter about an automobile accident in front of the church that killed a pedestrian and injured his wife. Sidewalks did not come to Bethesda until 1927, when Wisconsin Avenue was widened.

St. John’s was in debt in the Roaring 20s and for years had no vote in the Diocesan Convention because it failed to meet its quota of support. Before the Great Depression hit, the salary of St. John’s Rector, Reverend Clarence P. Parker, was cut from $3,000 to $2000, and he resigned citing the poor salary. The services of a janitor were suspended for five months; the organist volunteered to take a pay cut. But by the time of the 1930 Annual Meeting the church was solvent and hired a new rector, Reverend Joseph Williams.

In 1937 plumbing improvements were made. The kitchen was enlarged and the primitive plumbing was improved by removing two outside toilets and replacing them with modern indoor toilets.

The federal government grew as a result of the New Deal and World War II, and so did the population of Bethesda. By 1945 enrollment in Sunday school had more than doubled, and the church building had become too small. Construction of the current church began in 1947.

By 1949, there were approximately 1,000 families living in the Bethesda area affiliated with St. John’s, of which 700 were active in the parish. By 1951 continued growth compelled the church to rent houses in the area for Sunday school classes and parish meetings. St. Luke’s Mission was established by St. John’s on Old Georgetown Road. Two years later St. John’s started another mission in Potomac, called St. Francis.

In 1952 the Norwood Parish School was started in the church school wing. In 1956 fund raising began for the office and church school wing. In 1957 the old stone chapel was used as a library and meeting space. The Chapel of St. Mary was dedicated on November 26, 1963. That same year another mission church was started by St. John’s in the Montrose Road area, called St. James Rockville.

The Concord Hill School opened in the school wing in 1971, and the parish celebrated its 100th anniversary in 1973.

In 1984 Montgomery Hospice was started at St. John’s Church. In 1987 ground was broken for the Memorial Garden and the second Mother’s Morning Out Program was reestablished for mothers of the parish and mothers in the neighborhood. The Oneness Family School moved into St. John’s in 1989.

1995 saw the most recent major renovations at St. Johns: installation of an elevator; glass doors at the front entrance; improvements to the West Avenue entrance. In September 1997 Susan Gresinger Flanders became the first female Rector at St. John’s Church. Under her leadership the church held a Capital Campaign to fund a new organ, and renovated the altar area.

In November 2010 Rev. Sari Ateek was installed as the 13th rector. Rev. Ateek is continuing the tradition of openness and innovation that has become a hallmark of the St. John’s community, expanding the role of lay ministers and making his sermons available to a wider audience by posting them on the Internet.