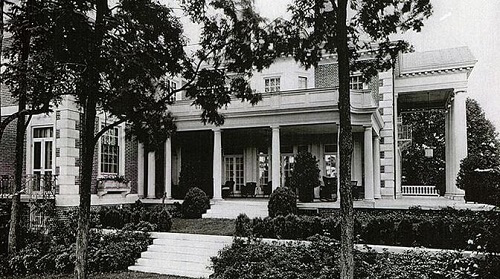 Prominent Washingtonians Captain James Frederick and Emma Oyster purchased the property in 1899. Architect Appleton P. Clark, Jr. designed their 9-bedroom summer house in the Colonial Revival style. In 1902, the Washington Evening Star described the Mansion as “one of the handsomest summer homes near Washington.”

In 1908, The Oysters sold the house and 99 adjoining acres to Charles and Hattie Corby. The Corby family enjoyed the house as a summer retreat until 1912, when they contracted Charles Barton Keen to make extensive modifications. Newly wrapped in its brick Georgian façade, the Mansion became the Corby Family’s permanent residence in 1914.

Read more at “A Home for the Arts” on the strathmore.org website