The Wilson Store, aka Community Paint and Hardware at 7250 Wisconsin Avenue 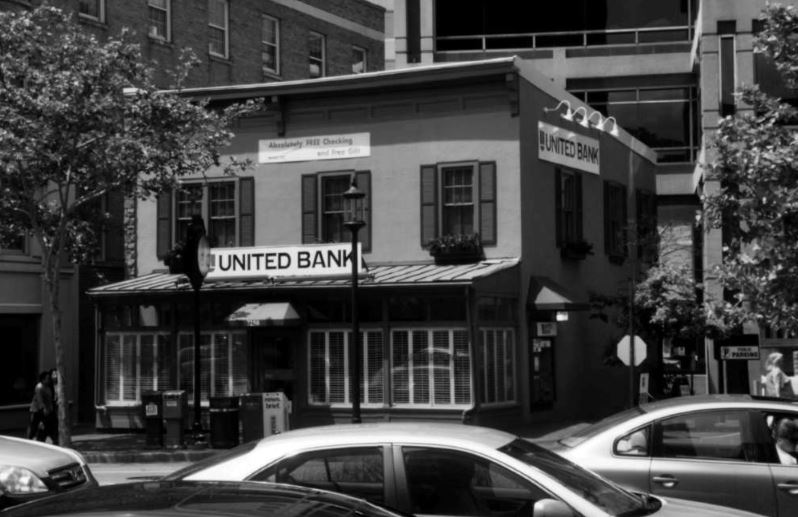 The store that became known as Community Paint and Hardware was constructed in 1890 on the site of the Rockville Pike Toll Booth, which was built around 1820 and abandoned in 1887. Parts of the Toll Booth may have been incorporated into the new store, which is the earliest commercial building still standing in the Bethesda Commercial District and the only surviving structure reminiscent of the initial development of the area.

Renamed Community Paint and Hardware in the 1930’s, the store is a typical commercial block building of the era. It is two stories tall with a horizontal division into two distinct zones: commercial space on the first floor with a plate-glass storefront, and residential space above. The building form was common in the mid-nineteenth through mid-twentieth century in the Washington, D.C. metropolitan region.

In 1890 Alfred Wilson left the teaching profession, built a new emporium in the style of the era with a sloping roof over the front porch, married Miss Minnie Poole, and made a home for the couple over the store. Before long his brother Herbert left the family farm on Wilson’s Lane and joined Alfred at the store.

The Wilsons had to fetch their stock themselves from the District of Columbia because wholesalers refused to deliver goods so far from town – 90 minutes each way was considered good time. The Wilsons stocked everything from groceries to kerosene, and from dry goods to notions, harnesses and hardware.

Wilson’s store served as Bethesda’s post office from 1895 to 1905. One of the Wilsons’ regular customers described the store in those days as “an old-fashioned country store with the post office in the corner, groceries on one side, and hardware and dry goods on the other. There was also a telephone – one of the few within miles. If someone wanted to get in touch with a Bethesda resident over the telephone, they rang Wilson’s store. In Wilson’s we bought our food, our ‘wrappers’ (as ladies dresses were then known), our red flannel underwear, gingham, sewing materials and novelties. In the winter the store supplied our coal and wood. From it we also obtained oil for our lamps, feed for the chickens and tools for the farm. In the evenings the young men of the community walked to the store and parked themselves around the huge ‘iron belly’ stove.”

When automobiles became common, the Wilsons sold tires, gasoline and motor oil next to the hay scale. The store became uncomfortably crowded, so Herbert built a two-story brick shop just south of Alfred’s store where he maintained a grocery business while Alfred specialized in hardware and dry goods.

When the store was built Bethesda was a small crossroads community. The next year, the Tennallytown and Rockville Railroad Company streetcar line began service along Wisconsin Avenue, triggering more development in the area. Even so, Wilson’s was Bethesda’s only store in 1900, when it housed a post office and grocery counter, and sold dry goods, hardware, fuel and animal feed.

Alfred Wilson was elected Bethesda’s Justice of the Peace after World War I. He sold the store to George Bradley in 1922; Mr. Bradley re-faced the store front with stucco, a popular way to update the look of buildings at the time, and hired the Broadhurst brothers as shop clerks. In the mid 1920’s the store housed Bethesda’s first public library.

The Depression forced Mr. Bradley out of business in 1931, at which point Ralph and Henry Broadhurst assumed control of the store. A friend recalled that Henry’s determination to run things differently dated from the day he saw Mr. Bradley refuse to help a lady carry a can of kerosene across a muddy Wisconsin Avenue.

Twelve-hour days and six-day weeks ultimately gave the Broadhursts the wherewithal to purchase the store outright in 1933, and they renamed it Community Paint and Hardware. They survived the Depression, albeit just barely — Ralph made deliveries and managed most of the manual labor, while Henry attended to the store and the finances.

When the Depression receded and Bethesda began to grow again the Broadhurst brothers bought adjoining lots and enlarged the store by adding on to the rear of the structure. As the store grew, the success of the business grew with it, thanks to a well-earned reputation for honesty, friendliness, cooperation and expertise. When its site was designated to be a stop on the new Purple Line it was then moved to its present location on Middleton Lane, just south of the Bethesda Theater. The building is noted and listed in Montgomery County’s Master Plan for Historic Preservation and is a locally protected historic site.