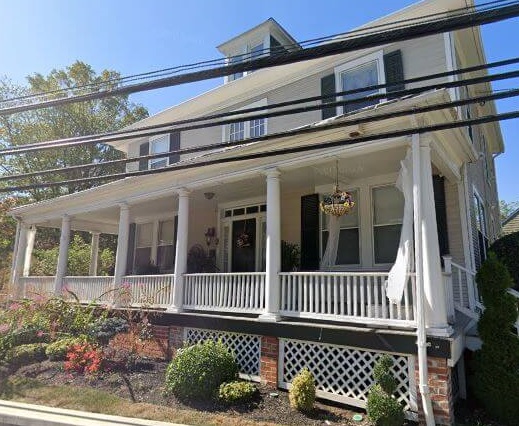 A Colonial Revival house built around 1905, 9100 Old Georgetown Road was the home of the Washington Senators star (and inaugural member of the Baseball Hall of Fame) from 1925 through 1936, when he led and managed the team

This large, square Colonial Revival house was built around 1906.  The impetus for its construction was an increase in real estate development along the Tennallytown and Rockville Railroad Company’s electric trolley line, which ran along Old Georgetown Road from Washington, D.C. to Alta Vista, just beyond Bethesda, where in 1891 the Bethesda Park amusement center was constructed.  The park was destroyed by a fire before 1900 but the trolley continued to run.

In the 1920s, when the automobile came into common usage, roads were improved and Montgomery County began to develop as a residential suburb.

The property at 9100 Old Georgetown Road went through several owners by the mid-1920s, when it was spied by the star of the Washington Senators, who had recently come into some money and wanted to buy a country home for his wife and small children.

Walter Perry Johnson pitched for the Washington Senators from 1907 to 1927. His remarkable pitching and hitting abilities were major reasons behind the Senators’ 1924 World Series win. It is possible that he purchased the house at 9100 Old Georgetown Road from his World Series bonus and fees received for writing articles.  In July 1925, newpapers reported that Johnson had purchased “the Elisha Hanson estate” on the Georgetown Road.  The location was variously listed as “Alta Vista”, “just west of Battery Park”, “just west of Edgemoor”, and “near Bethesda”.

The property is described thus in Johnson’s biography:

“Set back from the road by a large front yard and circular driveway, the property included a four-acre fruit orchard, a grape arbor, flower gardens, and a smaller house for domestic help.  There were chicken coops with the latest in electric poultry-raising equipment, with which Johnson resumed his old hobby of raising purebred birds.  It wasn’t long before the place had taken on the appearance of a small farm, with a cow, a horse, and of course numerous dogs.  A kennel was built where Johnson and Joe Engel raised prize-winning hounds together, and a side yard was fashioned into a baseball diamond.”  (Henry W. Thomas, Walter Johnson: Baseball’s Big Train (1998), p. 288.)

Daughter Carolyn Thomas said, “some of [my] fondest childhood memories are tied to the old farmhouse” where “I spent many a summer curled up in an apple tree and reading Tarzan books.”  It was the place where Johnson would “gladly receive a car full of fans who arrived at the house unannounced during dinner.”

Walter Johnson married Hazel Roberts, who was a Congressman’s daughter, in 1914.  Walter and Hazel had a happy marriage and six children (one of whom did not live past infancy).  Hazel died in 1930, apparently from heatstroke after driving alone cross-country with the children.  The funeral was held in the front parlor and Walter mourned silently by the coffin for days.  Johnson never really recovered from her death and did not remarry.

Walter Johnson managed the Washington Senators from 1929 to 1932, then moved on to Cleveland where he concluded his baseball career in 1935. The Johnsons lived on Old Georgetown Road through 1936; after his wife died, Johnson’s mother came to live with him and helped raise their children.

Known as the “Big Train,” Johnson was one of the first five players inducted into the National Baseball Hall of Fame in 1936, along with Ty Cobb, Christy Mathewson, Babe Ruth, and Honus Wagner.  Many consider Johnson the greatest right-handed pitcher of all time.  Known primarily for his fastball, Johnson for many years held both pitching and hitting records.

Walter Johnson was also renowned as a gentleman.  As Shirley Povich, Washington Post columnist, explained:  “Walter Johnson, more than any other ball player, probably more than any other athlete, professional or amateur, became the symbol of gentlemanly conduct in the battle heat.  Here was the man who never argued with an umpire, never cast a frowning look at an error-making teammate, never seemed to presume that it was his right to win, was as unperturbed in defeat.”  http://povichcenter.org/farewell-to-the-big-train/

In the summer of 1936, Walter Johnson sold the home in Alta Vista and moved his family to a 552-acre farm in Germantown (now the site of Seneca Valley High School).  He continued his involvement with Montgomery County by serving as a County Commissioner from 1938 to 1940 and from 1942 until his death on December 10, 1946.

The Walter P. Johnson House remains at its original location.  It is well-preserved and retains much of the original material, which display the house’s period workmanship.  But the property was subdivided after Johnson sold it and the house is now surrounded by nearby neighbors.

Once a dirt road, Old Georgetown Road is now a wide, busy commuter route and the house sits right on the roadway.  It no longer has the feel of a country home – but it helps us recall the Big Train and the days when his chickens would ramble around the yard.